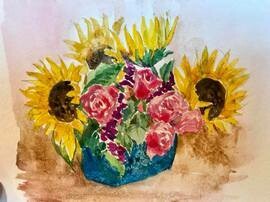 "Sunflowers" comes with a certificate of authenticity; as an original "Whiskey Painting". An American art form and exclusive group, Whiskey Painters, paint with their favorite alcohol instead of water.

Award winning artist, Kathleen Harrington, a resident of Hudson Ohio since 1981, was born and educated in New York City. She has lived in many cities in the United States and painted and exhibited her work in all of them. She has studied oil painting while living in Atlanta and egg tempera while in Buffalo. With her move to Ohio in 1981 she focused on watercolor, mixed media and collage.

Over the years she has shown her work and been awarded prizes locally, at the Women’s Art League of Akron, Cuyahoga Valley Art Center, The Epiphany Show in Bath, the Solon Fine Art Show, the National Collage Annual Juried Show, Signature of Solon Country Club, and in Akron, Willoughby, Beachwood, Cleveland and her home town of Hudson. Kathleen is represented at Peninsula Art Academy and Artful Living Gallery in Cleveland. Her work is on display on the internet in various sites including shows based in New Zealand and in France. She is a regular seller of ACEOs on eBay under the name KSHPaintsart. She has paintings included in the Miniature Show in Chambersburg PA and Nags Head N.C. You may meet her painting Plein Air in the Cuyahoga Valley National Park.

Kathleen has had pieces selected for publication in the Somerset Studio national magazine “Gallery”. She is a signature member of the National Collage Society. She is a member and a former officer of the Hudson Society of Artists, the Woman’s Art League of Akron and the Whiskey Painters of America. 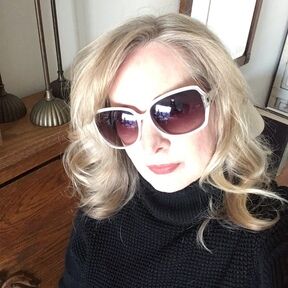